The temperature drops below 8°, the clocks go back and the heating is turned on. Winter is coming. I now find myself eager to take advantage of the early darkness and explore with a head-torch and a camera to see what the night sky can bring.

Below are some examples of my favourite night sky photographs, whether it be the story behind them or the final result. Included are the camera settings for your interest as I often get questions on how best to capture the stars. I am still learning though – your suggestions are also very welcome! 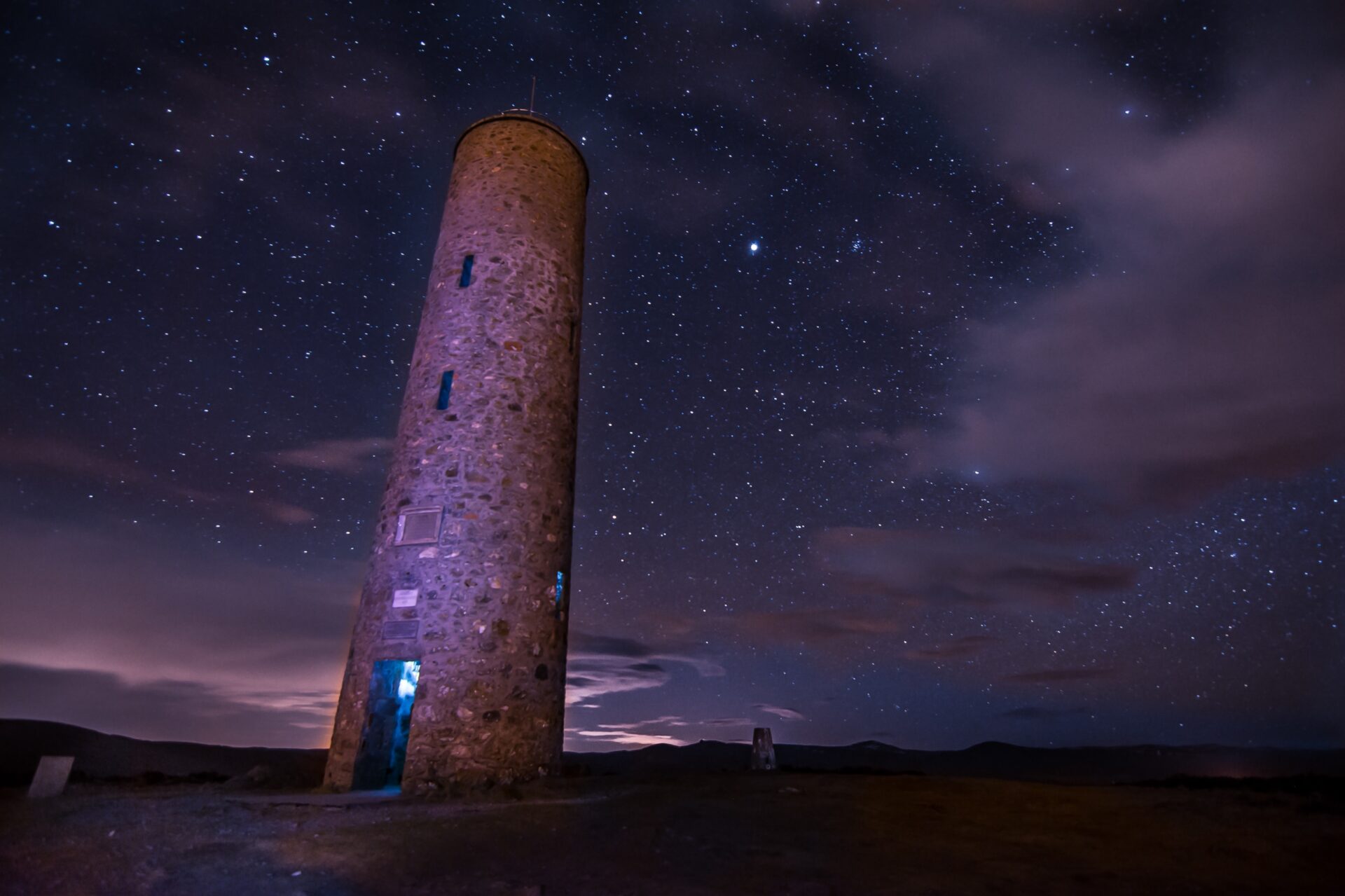 Scolty Hill in Banchory, Aberdeenshire, offers some fantastic night walks and mountain bike rides with star-lit views over the town of Banchory and darker skies out over Royal Deeside. On this occasion, a glimmer of Northern Lights were anticipated so we wrapped up and started to climb the hill hoping for a flicker of green in the sky. The Aurora was on the horizon to the North, only visible to the camera but looking behind the tower in the other direction, the stars were shining with Jupiter also bright in the Sky. 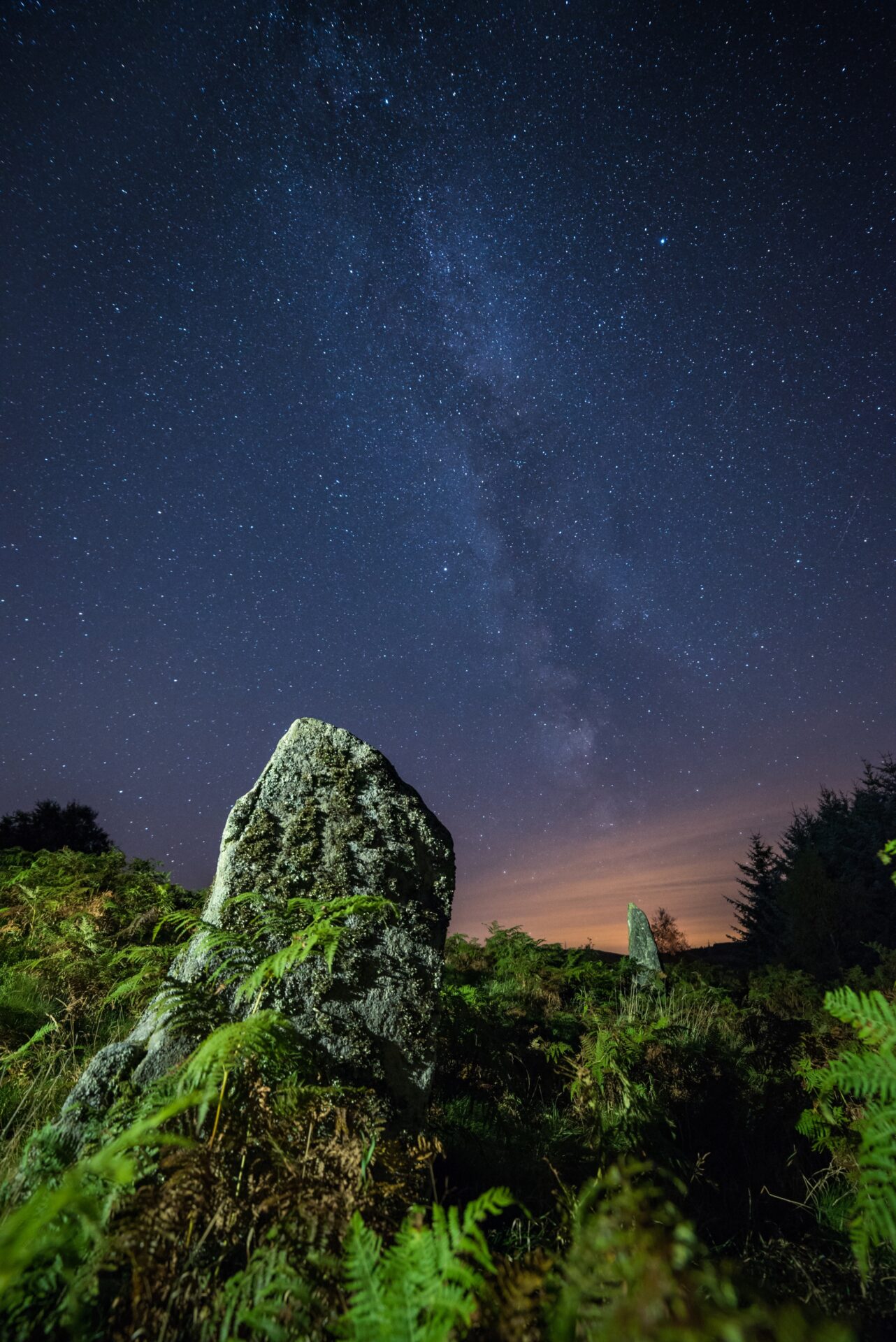 Part of the megalithic stone circle in Clune Woods, Aberdeenshire.

I had planned this shot for a while using the Photographers Ephemeris app to calculate when the Milky Way would be best placed above the horizon and behind the stones with low moonlight interference. All that was left was to hope that the sky would be clear enough one night during the time window.

Luckily this location was not far from home and I was able to walk up to the stones when the clouds disappeared and snap away using a low powered torch to light the foreground.

Another outing to view the Aurora Borealis with ideal dark sky conditions also provided excellent Milky Way viewing. I had photographed this chapel once before on a strongly moonlit night, but whilst returning form the loch-side toward the car, I couldn’t help but notice that the stars were aligned with the chimney! This long exposure tried to capture the detail of the Milky Way and is definitely now one of my favourites.

Although not very scientific, I had this idyllic cartoon image in my head of the stars being pumped out through the chimney and up into the night sky. A mini Aberdeenshire Milky Way factory if you like! 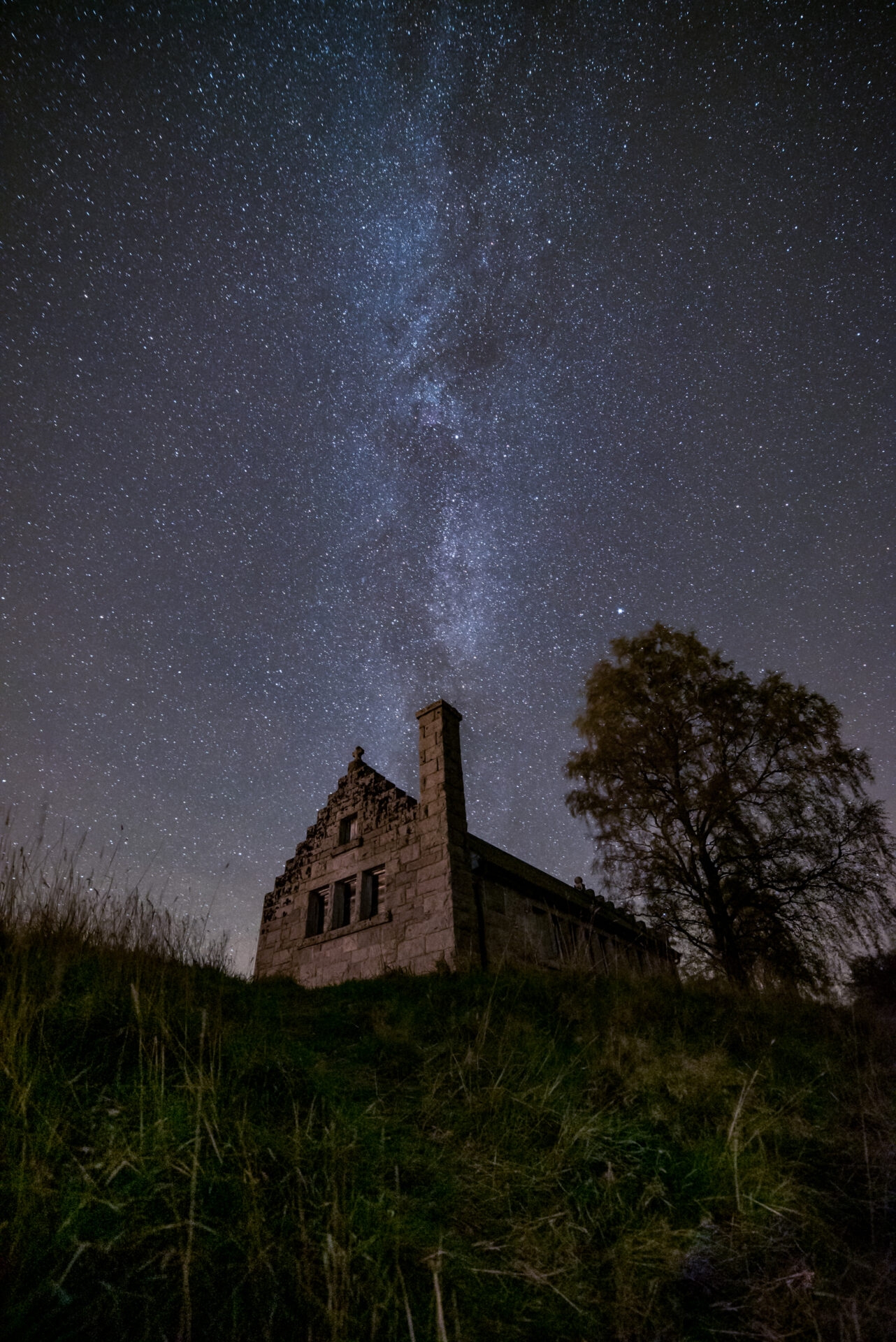 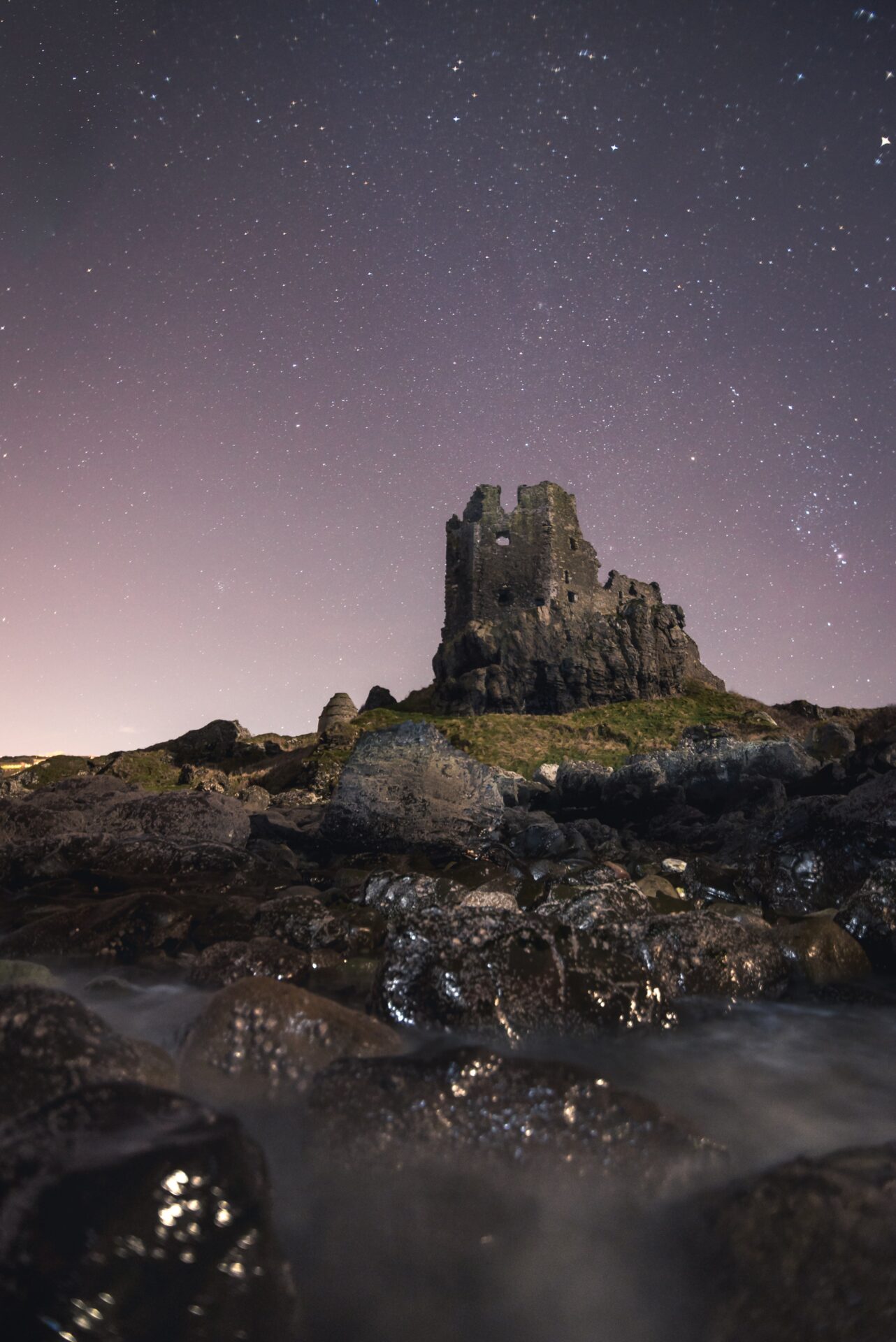 This ruined 16th century castle has always been a favourite stop when visiting my home-town of Ayr. Perhaps I’m drawn to the Ayrshire Castles since they spent a long time in the hands of the Kennedy Clan… or maybe it’s just because they are so picturesque!

Dunure Castle is located along the shore from the small fishing town of Dunure and the site has a rich history dating back to the 12th century. Recently featured in the TV series ‘Outlander’ as Seal Island amongst other scenes, Dunure is becoming popular with Outlander tourists!

On this visit, the moon was full and bright making it challenging to capture the stars but had the advantage of lighting the foreground along with the castle. I wanted to get in close to the water for this shot to capture the coastal setting of the castle… I really should invest in some waders… 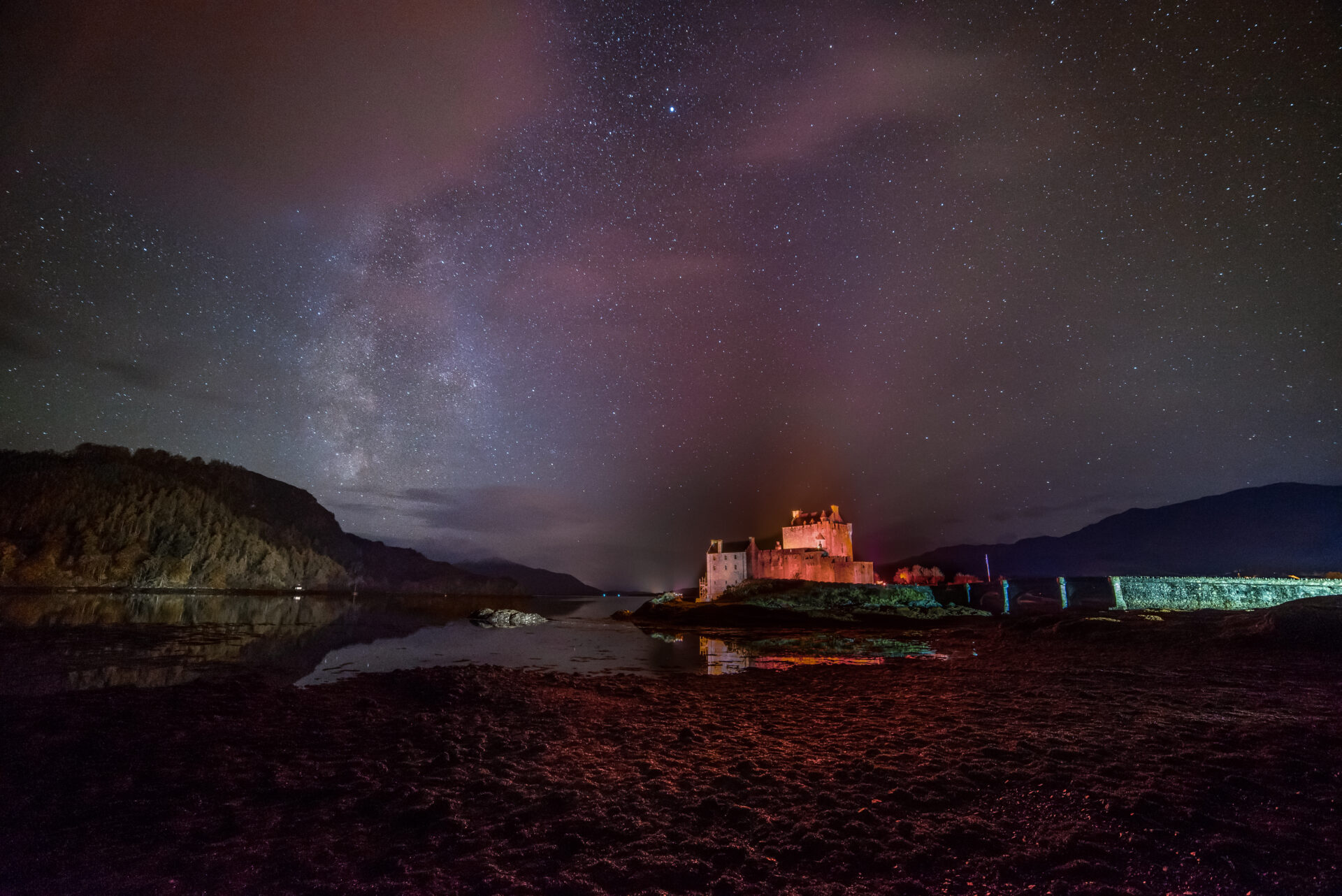 Whilst on the west coast for a photography trip, I couldn’t believe my luck whilst driving past the famous Eilean Donan Castle. Not only is the castle stunningly lit red to mark Remembrance Day, the Milky Way was also on display! Quite a special moment after embarking on the solo part of my trip after celebrating my birthday in Fort William.

It took me quite some time to work out how to capture both the stars and the bright castle, I attempted shots with gradational filters in addition to multiple exposures. This proved useful when editing in order to correct the exposure of the castle using an exposure blend.

In order to raise awareness and funds for Poppy Scotland, I had some limited edition, high quality prints to sell with proceeds going to Poppy Scotland. Please visit the products page linked below if you are interested in one of the remaining prints! 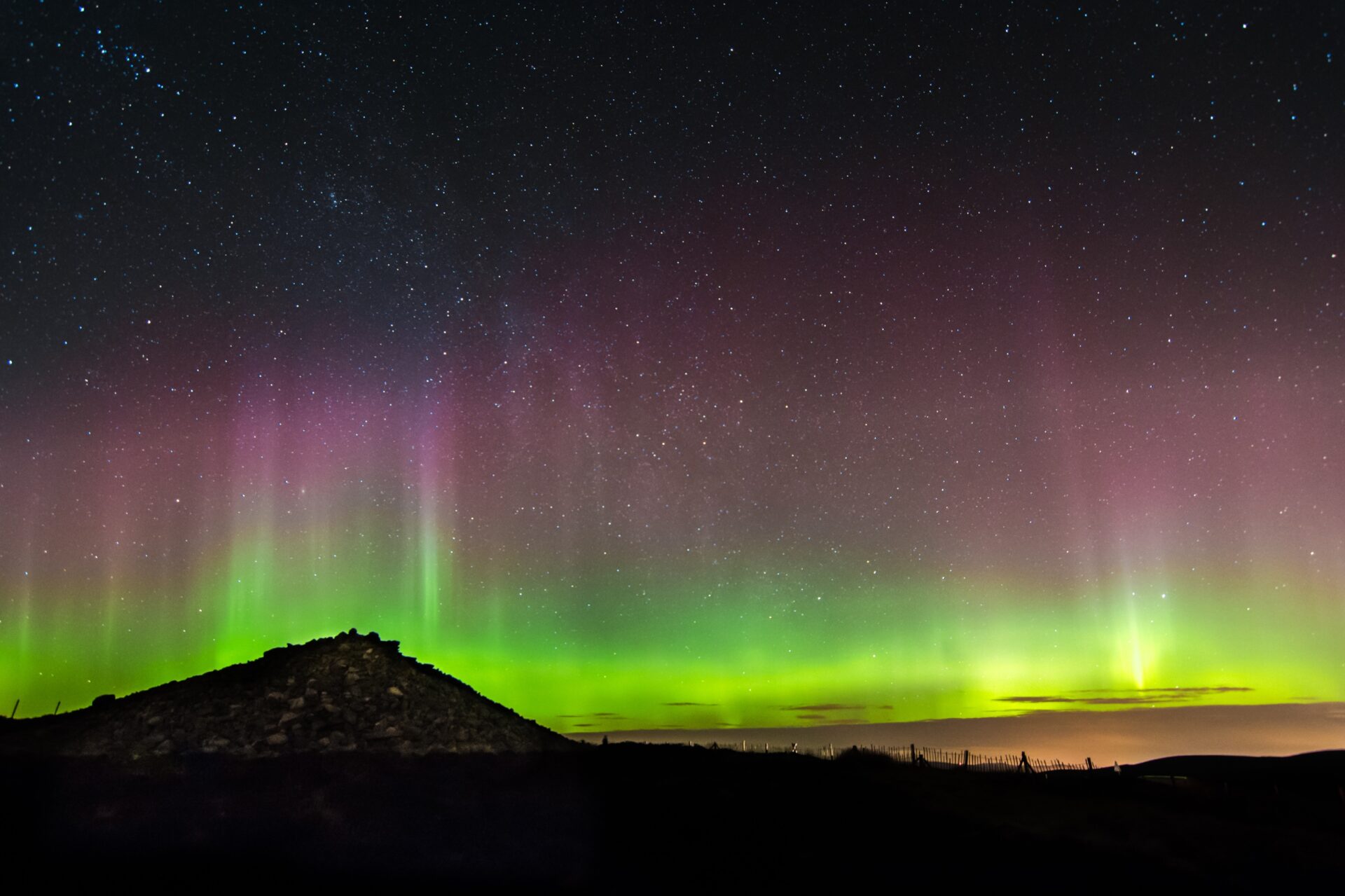 My first true Northern Lights spectacle! Having spent many cold nights trying to see and capture the Aurora Borealis in Aberdeenshire, I finally saw the lights dancing above me as my camera ticked away on a timelapse.

This shot was probably captured with too long an exposure – but I don’t regret it for one moment. I set the camera up when the lights were just a glimpse on the horizon and set the intervalometer to run. The longer exposure has likely resulted in the smoothing out of the dancing lights. However, having my camera set up for a timelapse allowed me to sit back and enjoy the show without interfering or tinkering with settings.

The lights were breath-taking, first pillars in the sky then various shapes making their way across the sky. One rocket like spectacle caught my attention which I was also thrilled to capture in the sequence. 4 hours outside in minus temperatures till midnight on a work-night – but totally worth it! 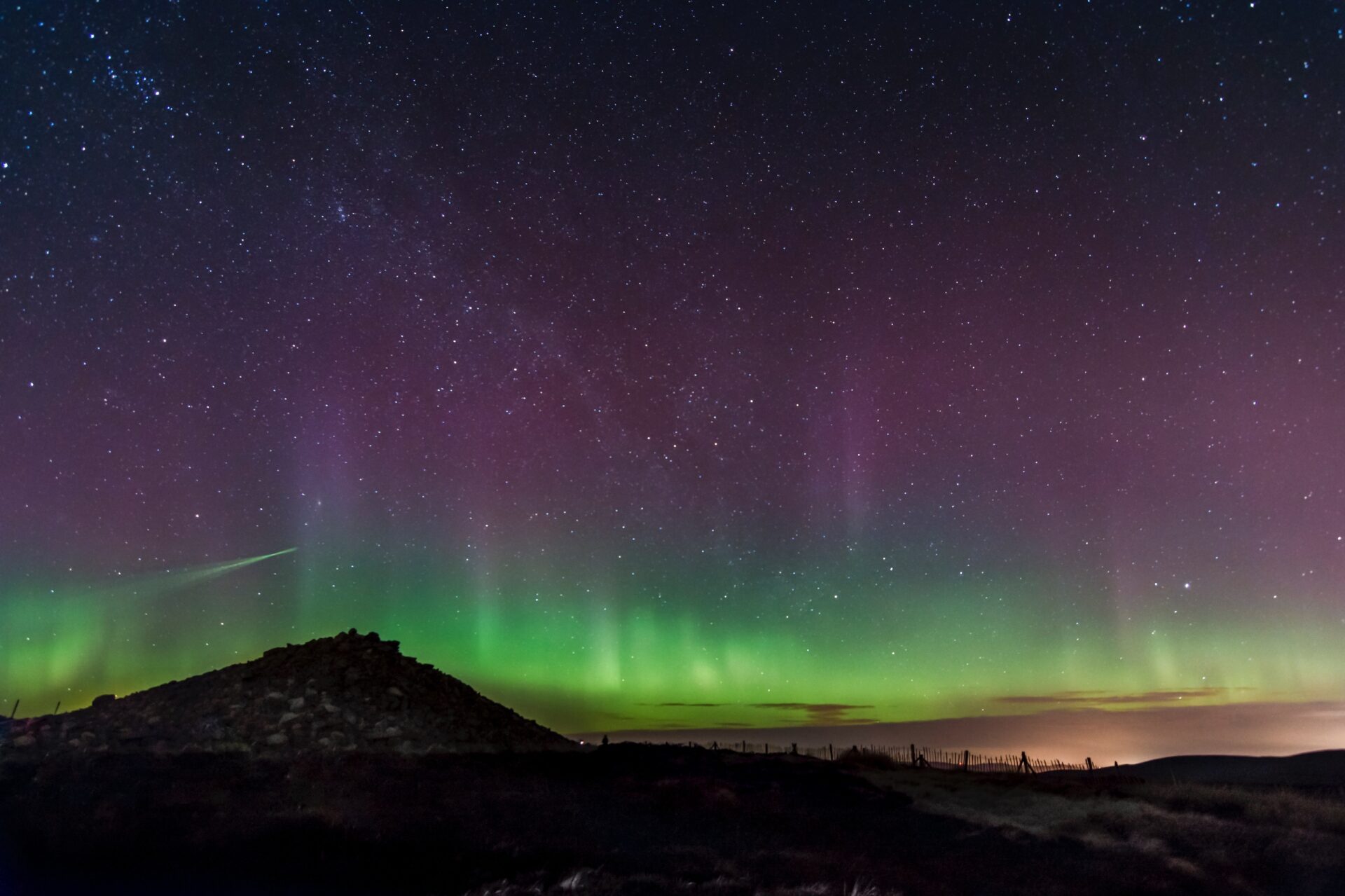 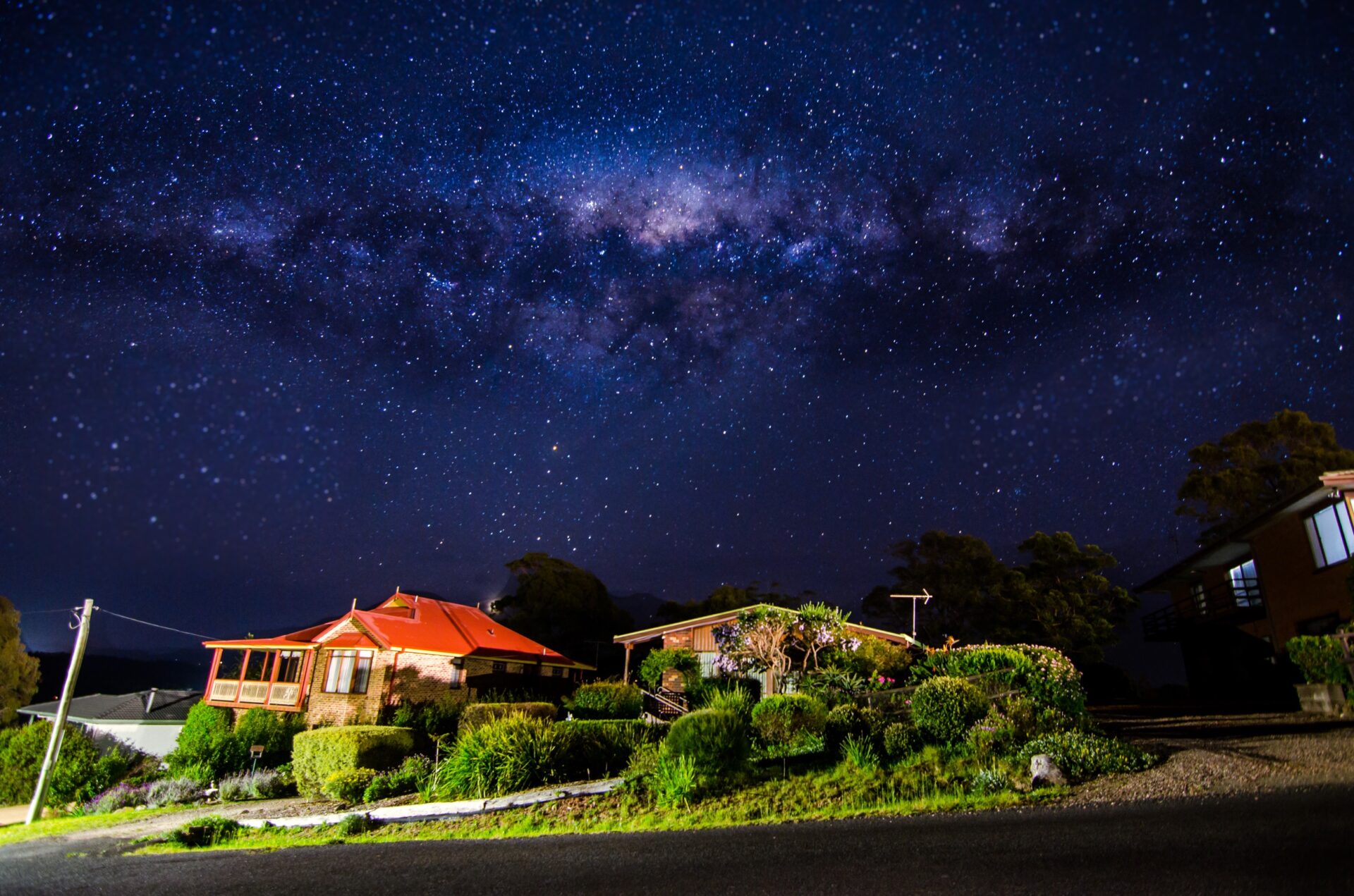 In the small coastal town of Merimbula, Australia, I decided to go for a walk to escape the hotel, stretch the legs and explore the area with my camera. The sky here was incredible!

This was my first real Southern Hemisphere night sky photograph and potentially the reason why I throw away so many attempts from Scotland! I captured this on my first entry level DSLR, a cropped sensor D5100. I was in a town with street lights, house lights etc etc…yet the Milky Way still popped out of the sky, even at fairly low ISO settings!… this prompted me to do a little more research.

It became apparent that the Milky Way is rather elusive in the Northern Hemisphere; summer months provide optimal viewing with the sun on the opposite side of the sky, unfortunately Scotland is far enough north that the nights are short and the core of the Milky Way barely rises above the horizon. Upon reflection, the majority of my favourite Milky Way shots from Scotland are in August, in the early hours, usually whilst camping when outside and struggling to sleep!

Regardless, I should have taken note of this address – I can only hope that someone familiar with Merimbula stumbles across this image and can share with the house owners, not a bad one to catch attention when selling their property! 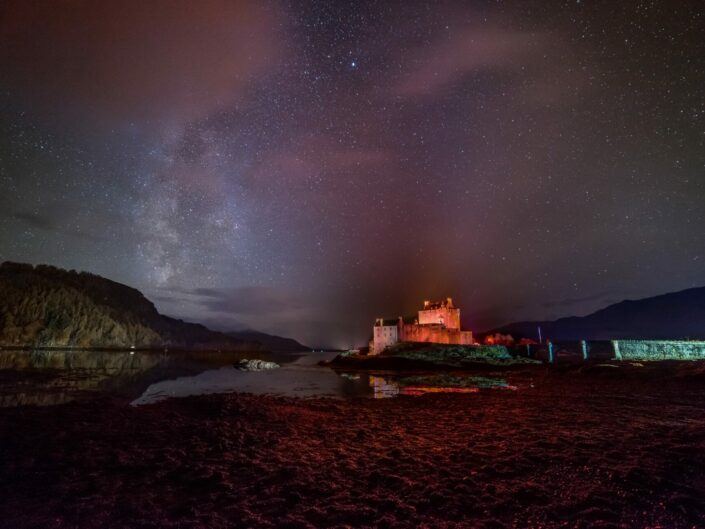 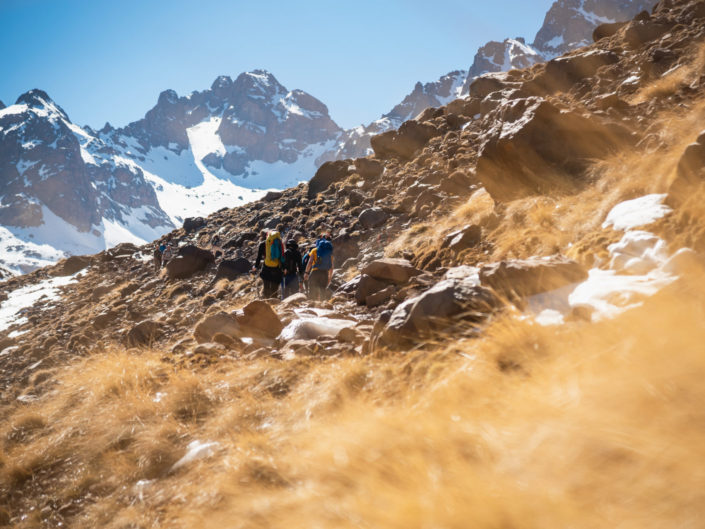 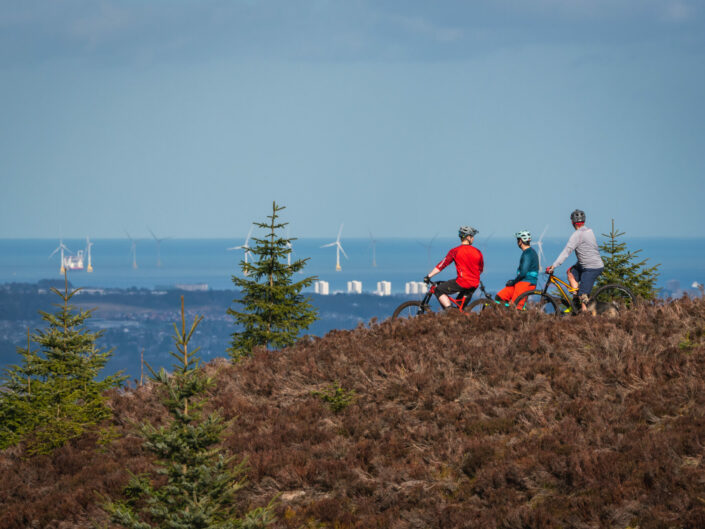 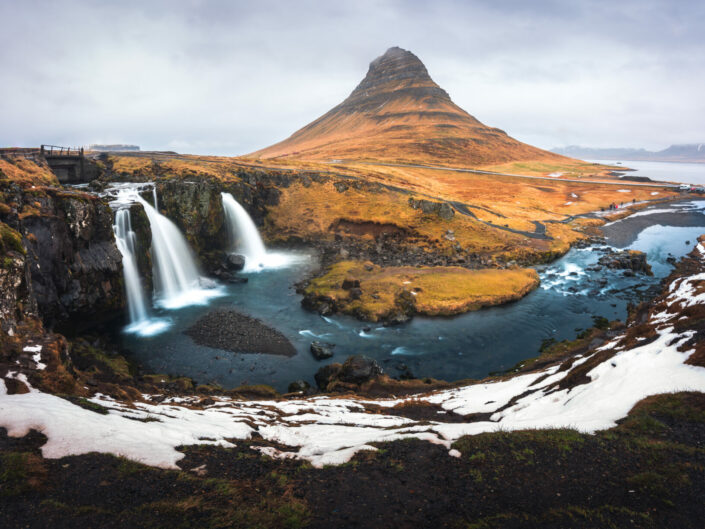